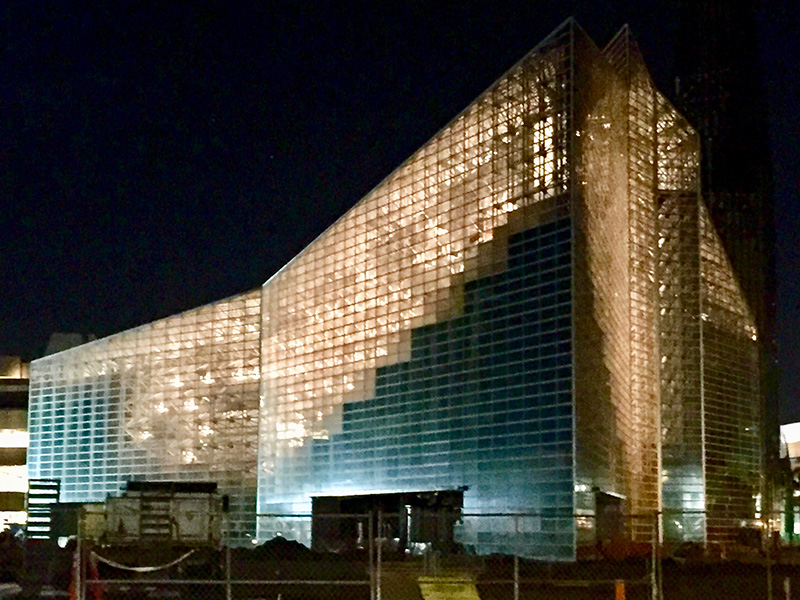 Late last year I had the opportunity to tour this amazing property with Laguna Friends of Architecture, a non-profit group dedicated to the appreciation and understanding of fine architecture and design. We often take our local architectural landmarks for granted, since we see them all the time, and this 34-acre campus encompassing some 320,000 square feet of buildings is no exception.

Robert Schuller was a Christian minister who relocated from Chicago to Orange County in 1955, starting a drive-in ministry by renting the Orange Drive-In Theater every Sunday, preaching from the roof of the snack bar to his congregation in their cars. It was this connection to the outdoors that later inspired the famed sanctuary building that gave name to the campus. His famous slogan from that time was “come as you are in the family car.”

Although Schuller subsequently opened a small 250-seat chapel, he continued his drive-in ministry as well. While looking for a location for his growing congregation, Schuller purchased a 10-acre walnut farm in Garden Grove, and started construction on the first buildings that would become part of the campus, including a 1,400-seat sanctuary. The televised Hour of Power debuted in 1970, partly because of the encouragement of Billy Graham, launching Robert Schuller’s televangelist career and his campus as one of the first mega-churches. Schuller bought additional land and built more buildings over the years, including the iconic structure for which the campus was named. Financial difficulties in the 2000’s led to a bankruptcy filing in 2010, and the sale of the property in 2012. The final bidders were the Catholic Diocese of Orange and Chapman University, with the Catholic Church having the winning bid of $57.5 million. Even with renovation costs far in excess of that amount, the Diocese still figures they are all in at far less than replacement cost. Work has been ongoing since the purchase, expected to be completed later this year. 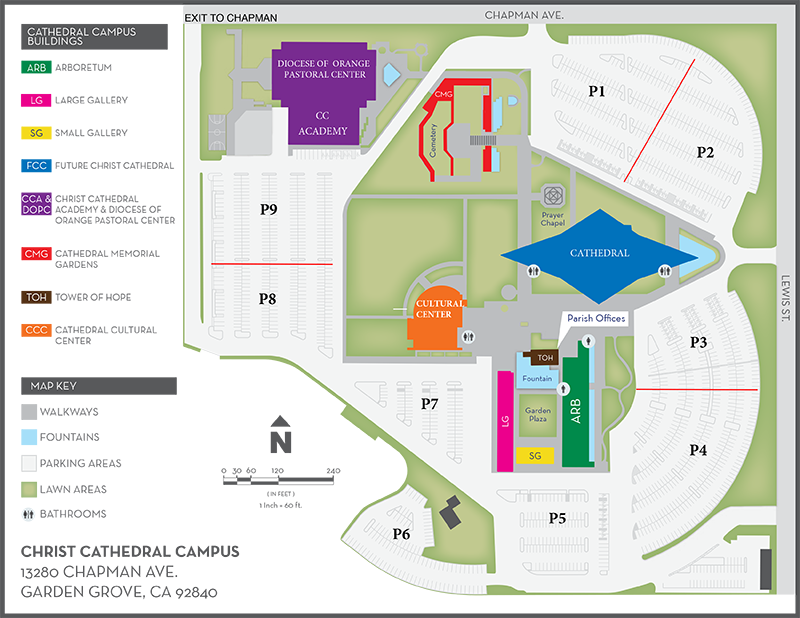 The map above shows the current layout of the property, situated at the corner of Chapman Avenue and Lewis Street in Garden Grove. The first buildings were the Large and Small Galleries, and the Arboretum, completed in 1961. These buildings were designed by famous modernist architect Richard Neutra, whose early associations included Frank Lloyd Wright and Rudolf Schindler. Schuller and Neutra met in the late 1950’s, and discovered they shared a similar vision, the idea of the connection of architecture to human emotion. 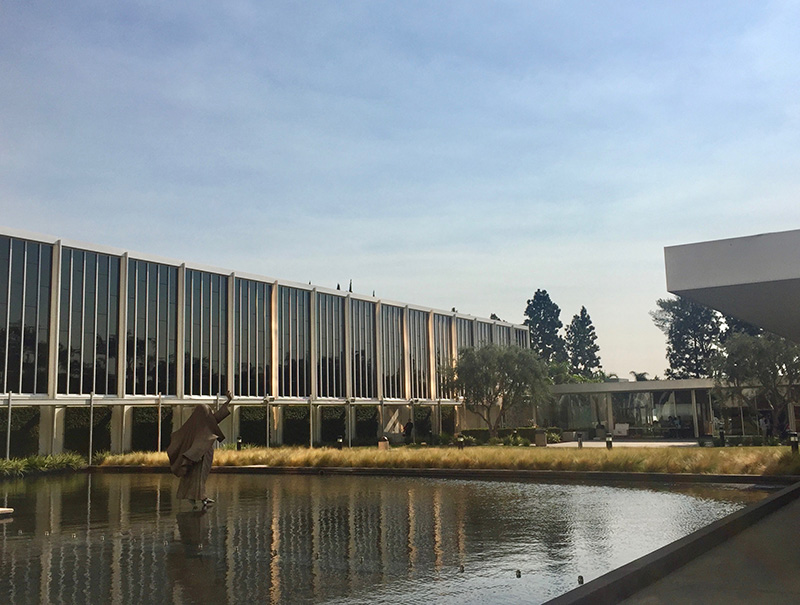 The buildings have clean lines and simple geometry, typical for mid-century architecture. To the right in the photo above are the single-story Gallery buildings, with sliding glass walls opening onto a landscaped and waterscaped courtyard. The Arboretum is to the left; an alternate view of the Arboretum is below. 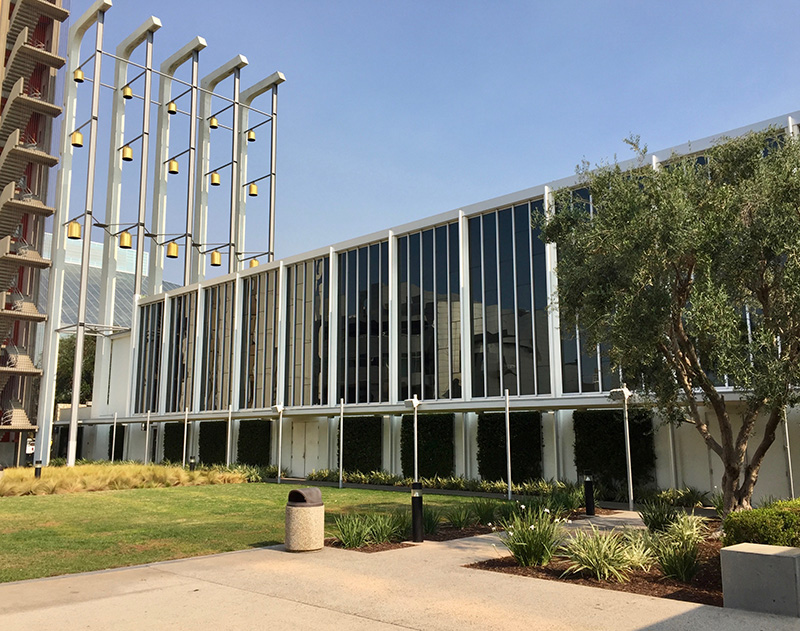 The interior of the Arboretum is above, noting that the condition of the structure required it to be mostly rebuilt as part of the recent renovation. This was the original sanctuary, and is currently used for worship purposes until the renovation of the larger sanctuary building is complete. A notable feature is the loft above the alter, whose purpose was not limited to housing ranks of organ pipes. Even with indoor seating, a significant part of Schuller’s congregation continued to listen from their cars in the parking lot, so Schuller preached from the loft, which had a door to a small balcony, allowing him to move between the indoors and the outdoors; a photo of the balcony is below. 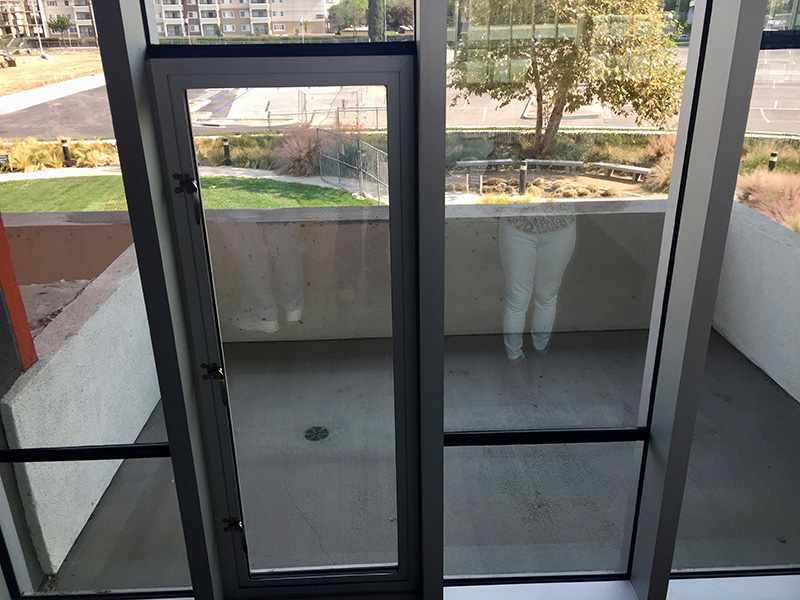 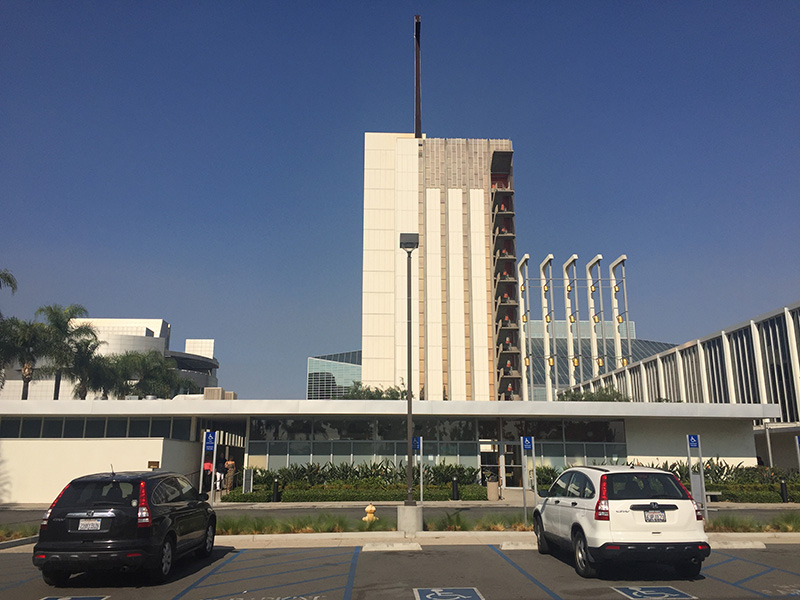 A few years later, Schuller commissioned Neutra to design the Tower of Hope, a 13-story office building seen in the background above, behind the Small Gallery building in the foreground. A chapel on the top floor offers commanding views of the Orange County. The structure was completed in 1968, and was the tallest building in Orange County for a decade. It is noteworthy that this building was named for New Hope Ministries, operating a suicide prevention hotline that continues today under the auspices of Catholic Charities of Orange County. A nighttime view of the Tower of Hope is below, shown in the background behind the Arboretum. 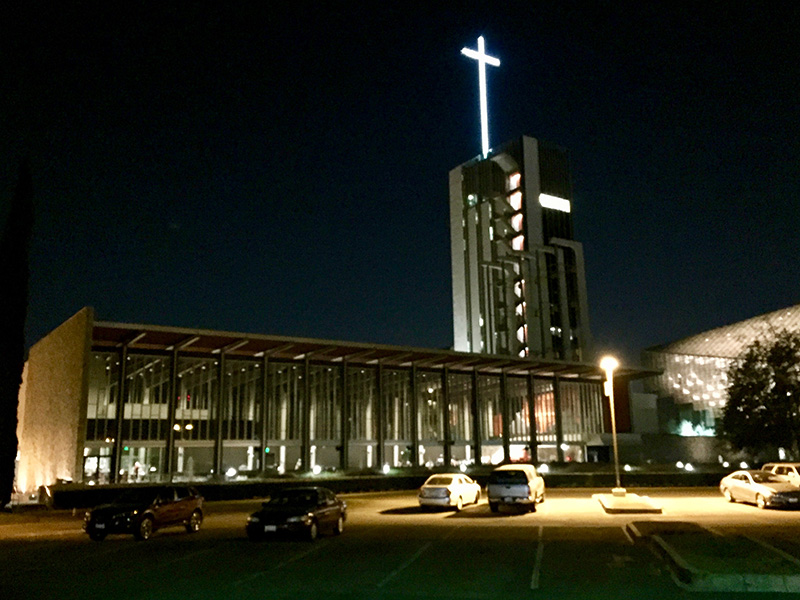 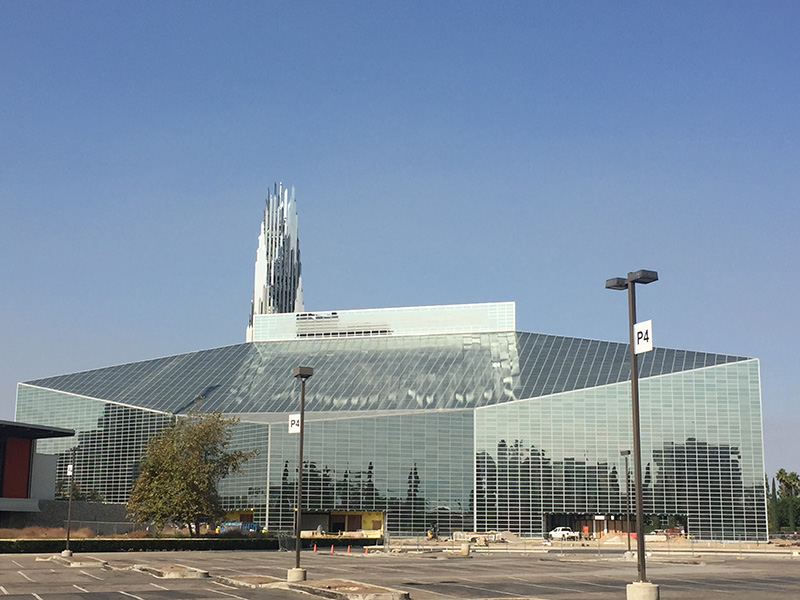 The growth of Schuller’s ministry led to the construction of the main sanctuary, designed by Philip Johnson, another modernist architect, completed in 1980; this building is one of Johnson’s best-known commissions. The angular, star-shaped structure got its name from Schuller, who said it looked like a “crystal cathedral” when he saw the plans. The building is constructed of mirrored glass over a steel frame, and satisfied Schuller’s desire to have a church “open to the sky and surrounding world.” Seating capacity is approximately 3,000, with many people having attended the Glory of Christmas and Glory of Easter pageants over the years. The current renovation is anticipated to address two significant shortcomings – acoustics and heat transmission (imagine an air-conditioned greenhouse in the summertime). The solution to both problems is the use of quatrefoils on the interior, shown in a rendering below. 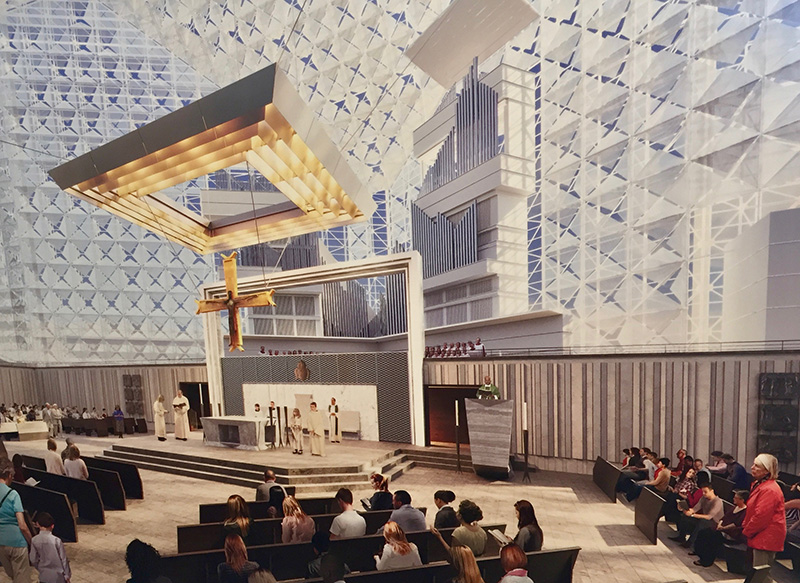 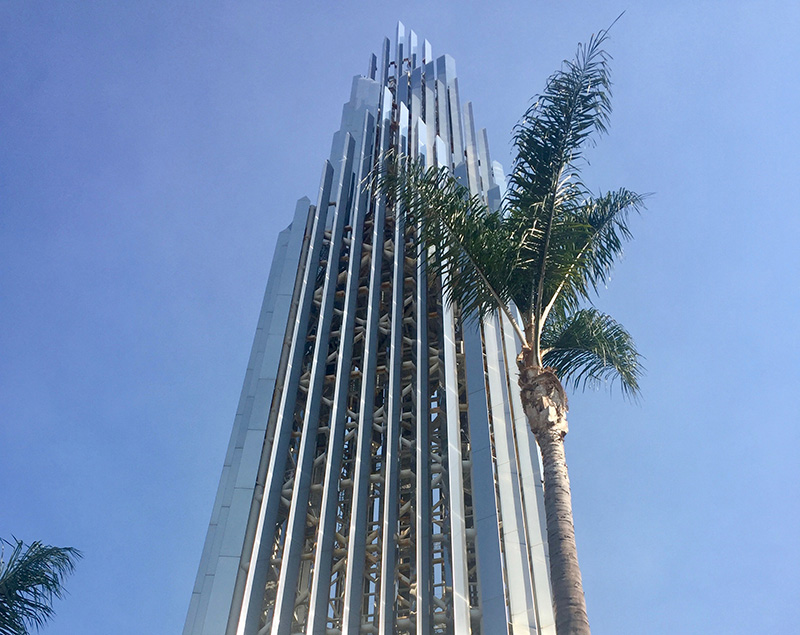 The cathedral building didn’t include a steeple, but a decade later Johnson was commissioned to design something comparable, coming up with the idea for a Great Spire, which was ultimately named Crean Tower after its major donor. The structure is not purely aesthetic, housing a 52-bell carillon (named after Schuller’s wife Arvella) and a small chapel.

Also constructed around the same time was a 4-story office and education building, not particularly notable from an architectural standpoint, but designed by the late Gin Wong, a famous Chinese-American architect, whose portfolio also included the Theme Building at LAX. 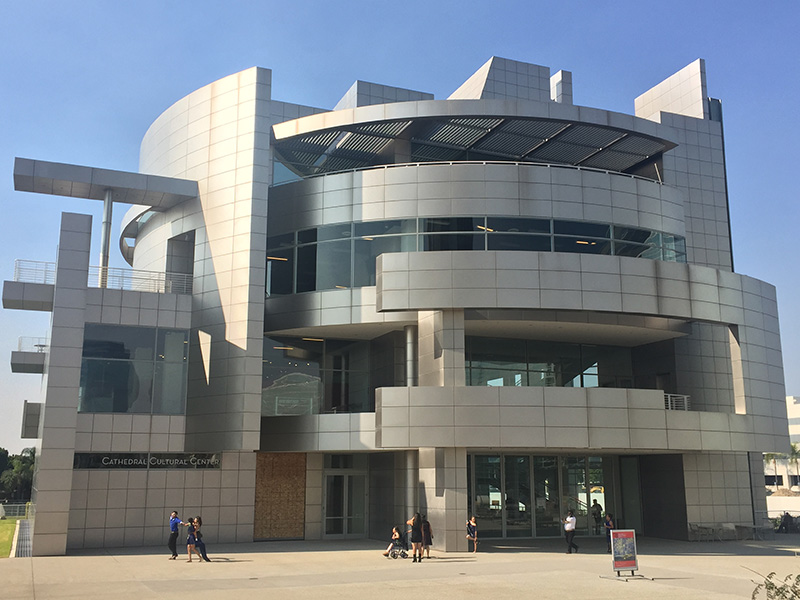 The last building during Schuller’s tenure was what is now known as the Cultural Center, designed by Richard Maier, perhaps best known as the architect for the Getty Center. This structure was completed in 2003, featuring a futuristic curvelinear design, intended to be a geometric complement to the angular shapes of the other buildings on the campus. Star Trek fans might recall the building as star fleet command from the movie Into Darkness.

It is impossible to write about this property without mentioning the two pipe organs that reside here. The Hazel Wright organ from the main sanctuary is one of the largest pipe organs in the world, disassembled and shipped back to Italy for rebuilding as part of the renovation. I had the pleasure of attending a couple of organ concerts here with my late father many years ago. And there is also the Frederick Swann organ that lives in the Arboretum, named after the esteemed concert organist and former musical director for the Crystal Cathedral. I’ve attended a few concerts here recently, and it is a magnificent machine; a photo is below. 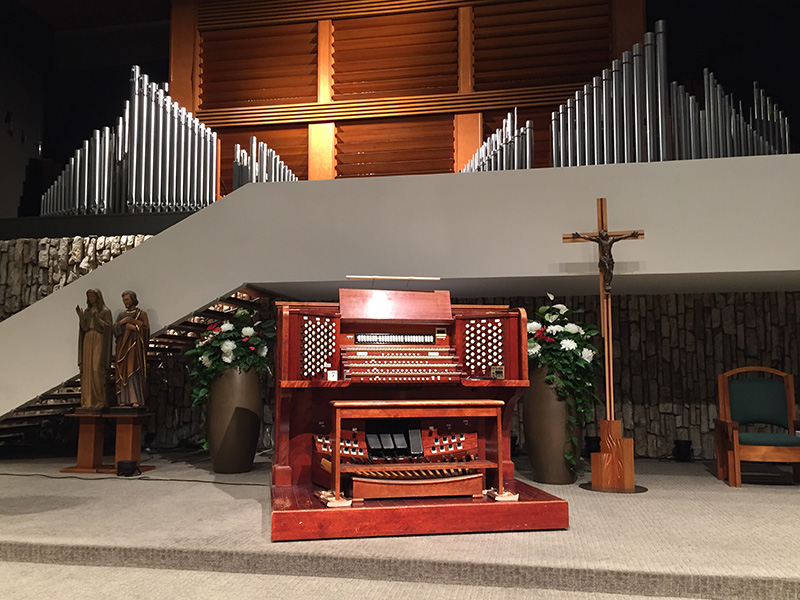 Schuller’s appreciation of architecture earned him a lifetime membership in the American Institute of Architects, uncommon recognition for someone who was not an architect.

Schuller, although a Protestant minister, also had a number of connections to the Catholic Church. His Hour of Power program was reportedly inspired by Catholic Archbishop Fulton Sheen, who had a popular television show back in the 1950’s. Schuller later invited Bishop Sheen to speak at the Crystal Cathedral, a sign of his respect for his Catholic colleague.

Schuller had a friendship with Pope John Paul II, even traveling to Rome in the late 1970’s to have the pope bless the plans for the new cathedral building. And when the property was sold during bankruptcy proceedings, Schuller personally endorsed the sale to the Church, rather than to Chapman University to preserve the Christian use of the property. In return, the Catholic Church, as the new owner, has made efforts to honor the legacy of Robert Schuller, and preserve the historical integrity of the campus.