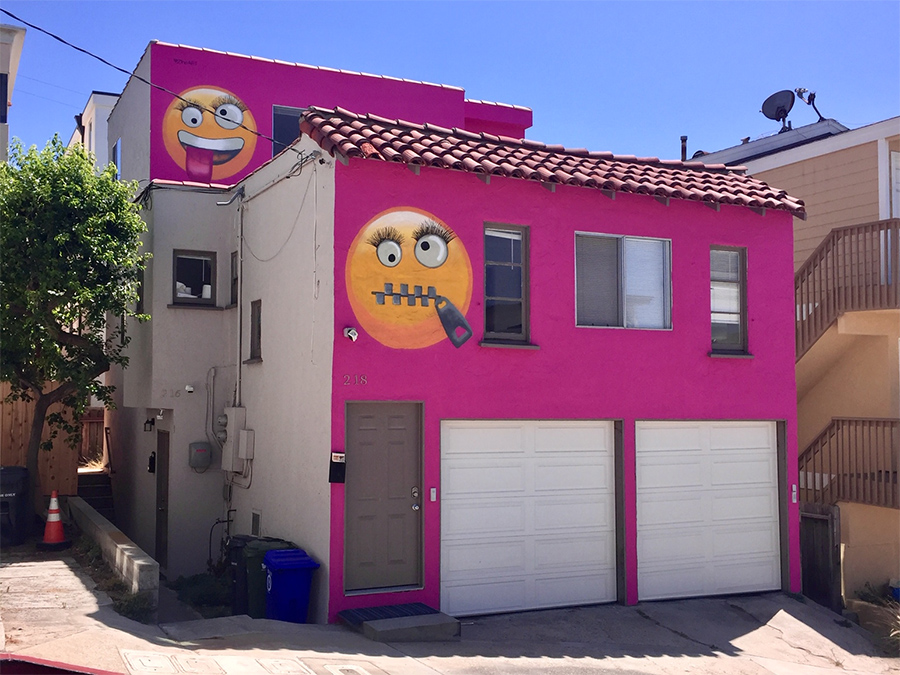 Manhattan Beach has an ordinance banning short-term rentals for less than 30 days in residential zones. The photo above is a property whose owner apparently didn’t get the memo, generating complaints from the neighbors, and a $4,000 fine by the city. The subsequent paint job in a nice shade of Pepto-Bismol pink, complete with huge emojis, certainly appears like a not-too-subtle middle finger to the neighbors and the city.

But in our quest to pursue a sharing economy, competing interests and unintended consequences abound (see ride sharing and dockless electric scooters). Home sharing (aka short-term or vacation rental) is an obvious benefit to owners who want extra income, and are willing to manage a business. But short-term rentals are opposed by the hotel industry for obvious reasons, and many complain that they can also displace local residents and reduce the stock of affordable housing. Neighbors are among the most vocal critics (like the folks in the Manhattan Beach example), noting that short-term tenants have little vested interest in the neighborhood.

Cities in North America and Europe have wrestled with these conflicting interests for years now, with varied results. A summary of short-term rental laws in major U.S. cities can be found here:

Features common to laws limiting transient occupancy of residential units include registration, payment of occupancy taxes, limitation on the number of units (often limited to the owner’s primary residence), limits on the number of transient occupancy days per year, and prohibition on short-term occupancy of rent-stabilized apartments. Even in cities without restrictions, homeowner associations can and often do restrict short-term rentals within their communities.

Meanwhile, at least four states (Arizona, Florida, Idaho and Indiana) have laws preventing local government from banning short-term rentals, while still allowing municipalities leeway to regulate health and safety issues. Palm Springs held a citywide election in 2018 to phase out short-term rentals in residential neighborhoods, which went down to defeat. And San Diego, which passed a law restricting short-term rentals to a primary residence for six months of the year, rescinded the law months later in response to a referendum petition facilitated by major players in the vacation rental industry.

What is clear is that a consensus on the issue of short-term rentals is not likely anytime soon, with local policies (sometimes under mandate from state law) ranging from permissive with few limitations to outright bans. For a glimpse of recent noteworthy legislation and what might happen in the near term, check this out (note that the website advocates for the vacation rental industry):

Where transient occupancy of residential properties is not allowed, pushback by the vacation rental industry should be expected, and illegal operations are likely to continue, depending on the vigilance of the neighbors and the willingness of the city to enforce their laws. The pink emoji duplex in Manhattan Beach, by the way, is currently listed for $1,749,000 . . . the big question: will the new owner of the now-famous house keep the outrageous paint job?

As a post-script to this commentary, yesterday the 9th Circuit Court of Appeals upheld a Santa Monica ordinance regulating home-sharing and vacation rentals. The existing ordinance was passed in 2015 (see Chapter 6.20 of the Santa Monica Municipal Code) and amended a few times since, most recently in September 2019. The Santa Monica law is considered one of the most restrictive such laws in the country, prohibiting “vacation rental” (exclusive transient use for 30 days or less) of any dwelling unit, while allowing “home-sharing” (rental of one or more bedrooms in a dwelling unit, while the host continues to live onsite). This decision may portend a tightening of rules prohibiting short-term rentals in other jurisdictions. See the following link to an article from the Santa Monica Outlook providing more information about the city’s home-sharing law and the Federal Appellate Court decision: http://www.surfsantamonica.com/ssm_site/the_lookout/news/News-2019/October-2019/10_03_2019_Federal_Appeals_Court_Upholds_Santa_Monicas_Home_Sharing_Law.html