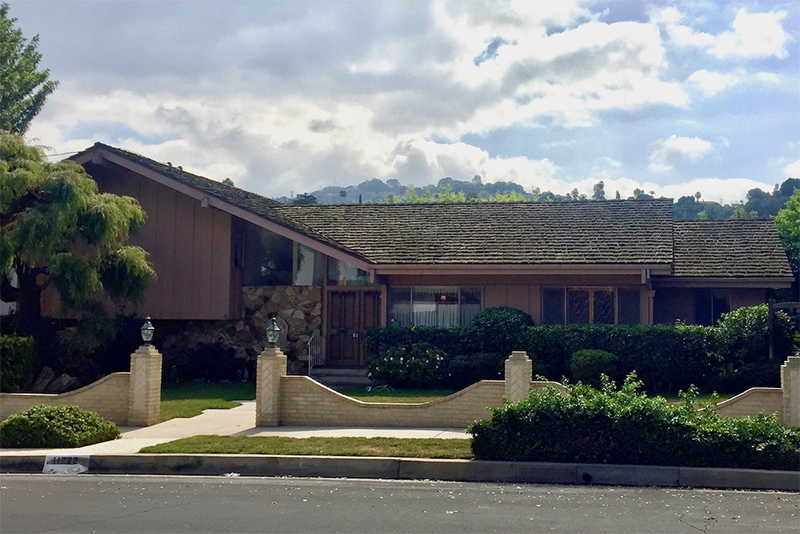 The recent sale of the Brady Bunch house in Studio City is an interesting study in the disconnect that sometimes happens between price and value (at least value as it relates to the market). As stated so eloquently by Warren Buffet, “price is what you pay, value is what you get.”

For those old enough to remember, the Brady Bunch was a popular sitcom in the early 1970’s, featuring a blended family and their live-in housekeeper. The role of the Brady house was limited to exterior shots only, including the show’s opening and closing scenes; most of the show was filmed on a studio set. The house was otherwise owned and occupied continuously by the same family until it recently sold.

The property is located in an area of Studio City variously known as Woodbridge Park or Tujunga Village; just to the west is the better-known neighborhood of Colfax Meadows. This area has a long connection to the entertainment industry, and is not infrequently used for location shoots (movies and commercials).

The home was built in 1959 with three bedrooms and three baths in about 2,500 square feet, and sits on a nice lot of 12,500 square feet. Classic split-level ranch style, well-maintained, but definitely caught in a 1970’s time warp. Under ordinary circumstances, a likely candidate for remodeling or redevelopment. For an inside view, check out this short YouTube video featuring the granddaughter of the original owner:

When the house hit the market this summer, it was priced in line with the neighborhood at $1,885,000. The listing referenced its provenance, but who would have known the frenzied bidding war that would ensue. There were reportedly multiple offers from corporate and entertainment industry types, including Lance Bass of NSYNC fame, who thought he had the winning bid. But no, the lucky winner was an LLC reportedly owned by HGTV, who plans to restore the home “to its 1970’s glory as only HGTV can.”

And the price? A cool $3.5 million, nearly twice the listed price. It isn’t uncommon for homes in this area to occasionally sell above list price, but not by this much. It is rumored to be the second most photographed home in the country (behind the White House), but seriously? Especially considering that the interior of the house wasn’t even used as part of the show.

In any event, the price is clearly way above the market based on recent sales. It isn’t necessarily the highest price in the area (including adjacent Colfax Meadows), but everything over $3 million is at least twice the size, and most in this price range are much newer construction. Notoriety definitely commanded a big premium, even though a nearby home where Britney Spears got married several years ago didn’t get the same kind of love.

So what is the significance of this aberrant transaction?

First, a property’s history can have an effect (a huge effect in this case) on what someone is willing to pay. And that translated into a substantial premium, in contrast to much of the stuff I work on, where extrinsic and/or intangible conditions sometimes have a negative impact on price (crime scenes and haunted houses, for example). Appraisers sometimes debate the impact of a famous architect or owner on the value of property, but the old real estate cliché that “George Washington slept here” seems to apply, even though the Bradys actually never slept in (or occupied) the house.

Second, price does not necessarily equal market value, at least in the conventional sense of how we might define the “market.” A variety of factors can affect price, some of which fall outside standard definitions of “value” – lack of knowledge, undue stimulus, atypical motivation, inadequate market exposure, creative financing and sales concessions, to name a few.1 It would be a stretch of epic proportions to think that the price paid for the Brady Bunch property is reflective of the market . . . unless of course the market is restricted to HGTV, whose motivation to acquire the house would probably not be considered “typical.”

Finally, while this property clearly sold for a huge premium, one has to wonder what HGTV has in store, and how that might affect the neighborhood if the Brady house becomes ground zero for a new reality TV show.

As a post-script, here is the latest on the Brady house as of late May 2019:
https://people.com/home/the-brady-bunch-kids-gush-over-their-newly-renovated-iconic-tv-home-its-very-nostalgic/