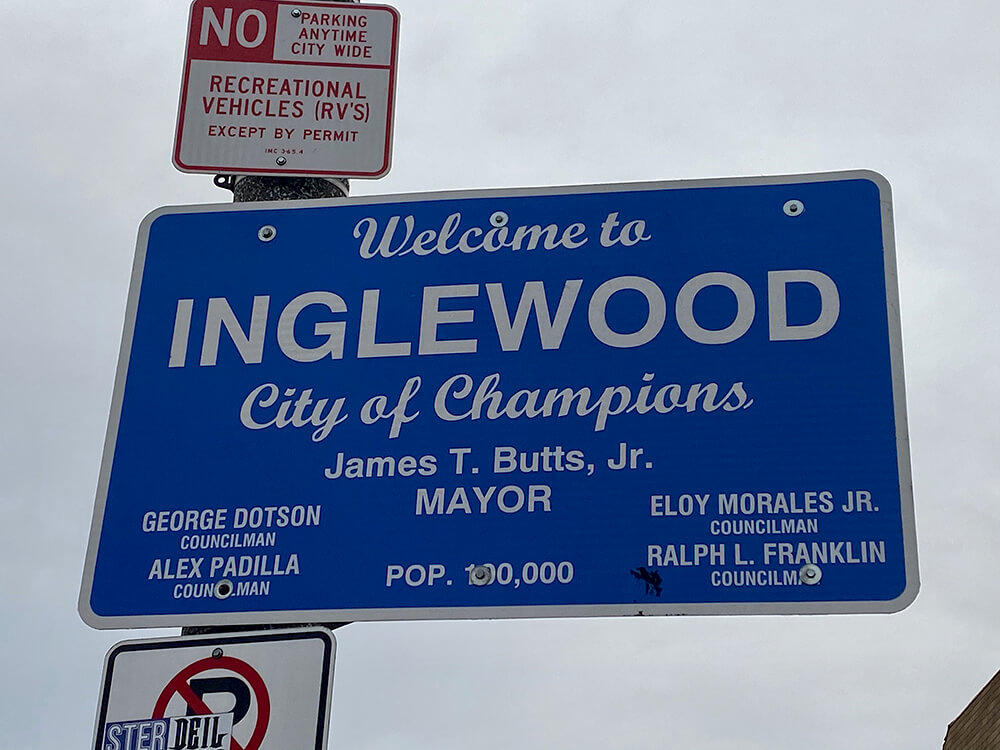 Residential price trends are often reported for large geographical areas, like MSA’s and counties; a popular index tracks the six-county Southern California market, an area of more than 20 million people.  But while macro-economic factors have a broad market impact, submarkets are strongly influenced by local issues.  These issues often have minimal impact on local pricing, but sometimes exert substantial influence that won’t be reflected in broad market statistics.  My work in the area of real estate damages frequently involves studying price impacts on small geographic areas – a neighborhood, a tract or even a handful of homes.

As an example of how local influences can have an outsized effect on home prices, let’s look at Inglewood, an inland city of approximately 112,000 people in the South Bay area of Los Angeles County, just east of LAX.  Inglewood was incorporated in 1908, a fairly typical residential community with supporting commercial uses and a few small industrial districts.  Hollywood Park racetrack was a staple of the community for decades, closing in 2013 after a 75-year run as one of the premier horse tracks in Southern California.  The racetrack was demolished in 2014, and together with adjacent land, was slated for redevelopment, with plans ultimately including a new NFL football stadium and performing arts center, part of a larger mixed-use project to include housing, a luxury hotel, retail and office space, along with a new casino and other public spaces on 300 acres.  The stadium was announced in 2015, team relocation (Rams and Chargers) approved and stadium construction commenced in 2016; Social Finance got naming rights in 2019 (SoFi Stadium), and completion is scheduled for mid-2020.  The entire $5-billion project is expected to generate thousands of new jobs, and the economic impact will likely change Inglewood for decades to come – welcome news for a city that has struggled with budget deficits and a troubled school district.

Also under construction is the MTA Crenshaw/LAX light rail line, bringing major public transit to Inglewood; the project was approved in 2012, broke ground in 2014, and is expected to open to the public in mid-late 2020. The Forum is an iconic multi-purpose indoor arena which hosted the Lakers and Kings from 1967-99, purchased by Madison Square Garden Company (MSG) in 2012, and reopened as a major concert venue in 2014.  Finally, a proposed arena for the Clippers is also in the works just south of SoFi Stadium, but currently mired in litigation with MSG, even as the Clippers propose to have the venue completed in 2024, after expiration of their lease at Staples Center.

It is no secret that lots of big stuff has been happening in Inglewood over the past few years; below is a Google Earth aerial of the major projects in Inglewood, followed by photos of SoFi Stadium, The Forum, and new Westchester/Veterans light rail station west of downtown Inglewood.

A notable consequence of Inglewood’s economic development is a much-publicized increase in home prices and rents; the following from Curbed is fairly typical: https://la.curbed.com/2019/10/11/20908176/inglewood-home-prices-stadium-costs, citing PropertyShark indicating that home prices in Inglewood increased 63% from 2014-18, as compared to a 25% increase in Los Angeles over the same time frame.  It seems like an interesting exercise to see if this is indeed true, what else the information might show, and what factors might be responsible.

MLS sales of single-unit properties in Inglewood were compiled from January 2011 to date, and aggregated into annual time periods using median price per square foot.  The year 2011 was chosen as a starting point because it was prior to the most significant recent events, particularly the closure of Hollywood Park (December 2013), ground-breaking for the Crenshaw/LAX light rail line (January 2014), announcement of a new NFL stadium (January 2015), NFL approval of the Rams’ relocation to Los Angeles (June 2016) and stadium ground-breaking (November 2016).  The chart below shows the price trend for residential properties in Inglewood, along with a timeline of major events:

Prices were relatively unchanged from 2011-12, with an upward trend from 2013-18, and a leveling off in 2019.  What is notable is not the fact that prices were increasing, however, but the magnitude of the observed increases, particularly in 2016 and 2017, with price growth of 19-20% annually.

For comparative purposes, similar price statistics were compiled for three other inland South Bay cities of relatively similar size (90,000-150,000 people) – Hawthorne, Torrance and Carson.  Homes in these cities are slightly newer and larger than the housing stock in Inglewood; median household income is also higher in Torrance and Carson.

It is notable that Hawthorne and Torrance both reflect higher median prices, with Hawthorne clearly outpacing Torrance over this time frame.  Carson also had slightly higher prices in the early years of the study, but Inglewood caught up in 2016, and surpassed Carson over the subsequent years.  What is not as readily apparent from this chart is that Inglewood also outperformed Hawthorne and Torrance, particularly over the critical years of 2015-17.  To better illustrate this, the following chart uses the same data to calculate year-over-year price changes:

As noted, the variance in price increases was especially pronounced in 2015-17.  From 2014-17, corresponding to major events in the development of SoFi Stadium and the surrounding area, prices in Inglewood reflected an aggregate increase of nearly 60%, compared to only 20-26% for the other three cities.

To give a broader macro perspective, MLS price data for Inglewood was compared to prices for the entire Los Angeles metro area, using the S&P CoreLogic Case-Shiller Home Price Index for Los Angeles (https://us.spindices.com/index-family/real-estate/sp-corelogic-case-shiller).  The following charts show a comparison of annual median prices in Inglewood to annual median for the Case-Shiller index (Case-Shiller Index is current through September 2019), as well as year-over-year price changes.

Price growth in Inglewood clearly outpaced the index for the metro area, with consistently higher year-over-year increases from 2014-18.

Aggregate price changes for Inglewood, comparable cities and the LA metro area are summarized below, for the entire time period studied (2011-19), and also for the time frame referenced in the Curbed article (2014-18):

The analysis confirms that Inglewood outperformed the market, as widely published in the media.  Over the entirety of the period from 2011-19, only Hawthorne was a distant second, perhaps because of the construction of the Crenshaw/LAX light rail line that started in early 2014, which directly benefits both Inglewood and Hawthorne, but not Torrance or Carson (Hawthorne prices spiked significantly in 2014).  Over the 2014-18 time period, which encompasses most of the major events relating to SoFi Stadium, Inglewood was a clear leader in home prices, with increases nearly 2-3 times those in comparable cities and the metro area.  The Curbed article referenced earlier indicated a 63% increase in Inglewood’s median sale price from 2014-18, while the actual increase was 78.4%, even greater than indicated.  This disparity might be due to the PropertyShark data using absolute prices rather than price per square foot, which controls for home size, arguably a more accurate indicator in most cases (using absolute prices from Inglewood MLS data yields an increase of 66%, reasonably close to the statistic quoted in the Curbed article).

It is hard to dispute the contention that SoFi Stadium (and the surrounding development to come) has had a profound impact on Inglewood home prices, and by extension, housing affordability (median household income in Inglewood increased only 1.65% annually from 2010-19).  Construction of the new light rail line may account for price increases noted in Inglewood and Hawthorne in 2014, but Inglewood price increases thereafter would seem mostly tied to activity associated with the new football stadium.  Some market participants suggest that Inglewood’s proximity to the Westside and suburban vibe are factors, but the city’s ambience and location haven’t really changed.  Renovation of The Forum probably had relatively little impact, given that the venue has a long history, and was still used for various events prior to its acquisition by Madison Square Garden Company in 2012.

Although not included as part of this study, anecdotal information indicates that rents have also been affected by what Inglewood’s mayor describes as “economic prosperity.”  A grass roots organization called Uplift Inglewood lobbied for rent control, which was passed by the city in June 2019, capping annual increases at 5%, only months before California passed a slightly more lenient statewide rent control law (limiting increases to 5% + inflation).  Uplift Inglewood has also been fighting against the proposed Clippers arena, arguing that state law mandates that affordable housing should take precedence when selling public land; a November 2019 court ruling dismissed the lawsuit, although another legal challenge by Madison Square Garden Company is pending.

The moral of this story is that real estate is still local, and location matters . . . and all market trends aren’t created equal.  Increased housing costs are an unintended consequence of Inglewood’s new “economic prosperity,” and probably not the only one.