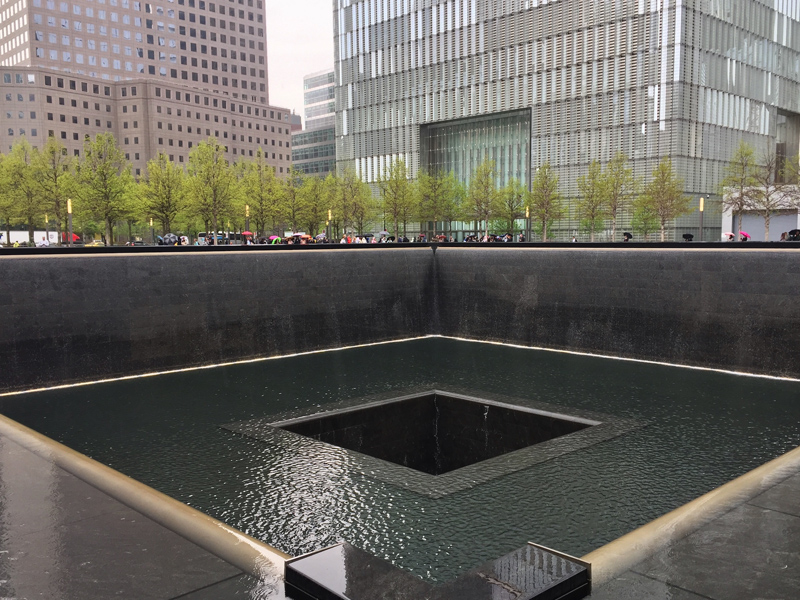 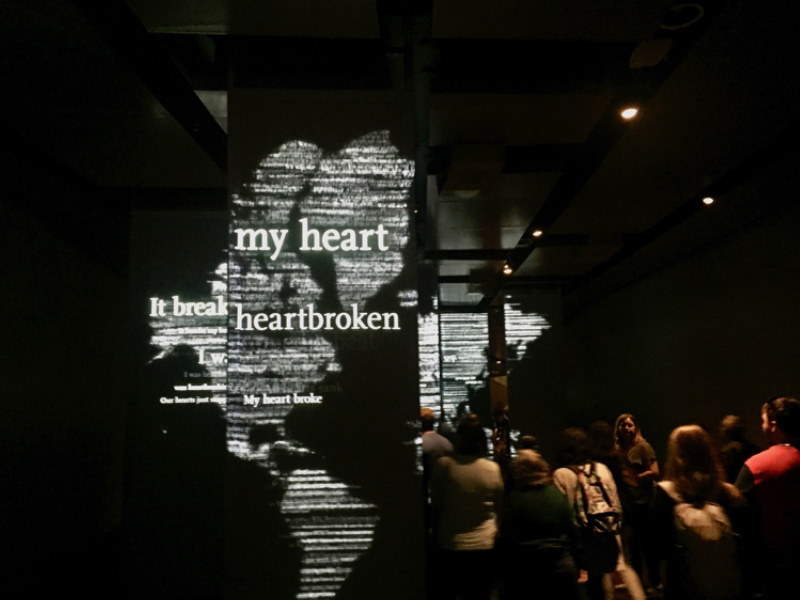 I never saw the original World Trade Center, but I had an opportunity to visit the 9/11 Memorial and Museum on a recent trip to New York, and Memorial Day seemed an appropriate time to reflect on that.

The World Trade Center was a 16-acre complex of seven buildings in Lower Manhattan, constructed on landfill adjacent to the Hudson River, dominated by two 110-story skyscrapers identified as 1 and 2 World Trade Center, variously known as the North and South Towers, or just the Twin Towers. Acquisition of land for the project began in 1965, and ribbon-cutting for the two towers occurred in early 1973, with several of the other buildings constructed thereafter. A model of the WTC complex is below. 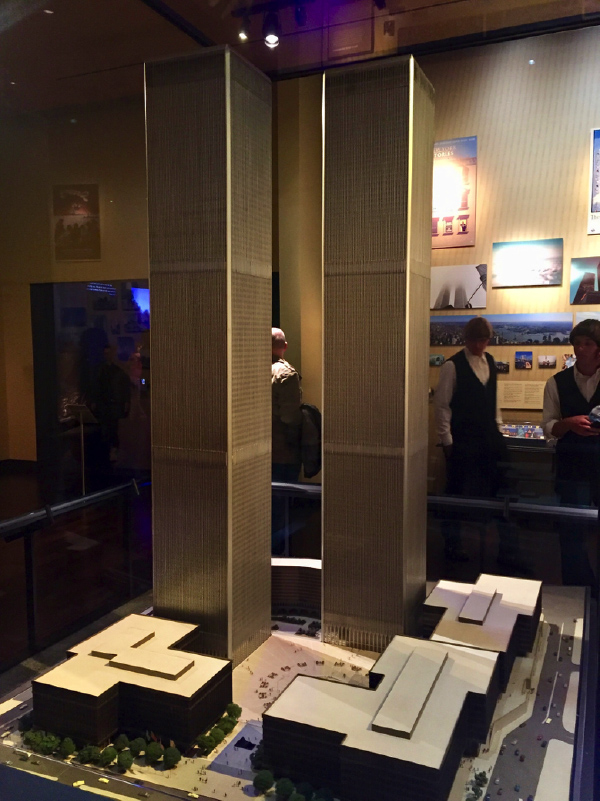 While the WTC experienced major events during its lifetime (1975 fire, 1993 bombing and 1998 bank robbery), it was the events of 9/11 that will forever live in our memory, forever changing our lives in ways large and small.

The first plane struck the North Tower at 8:46 am EDT at floors 93-99, while the South Tower was hit by a second hijacked plane at 9:03 am at floors 77-85. The South Tower collapsed first after less than an hour, the North Tower a half hour later. Other buildings in and adjacent to the WTC complex were either destroyed in the attack or subsequently demolished because of heavy damage. Before and after photos of the city skyline from the 9/11 Museum are shown below. 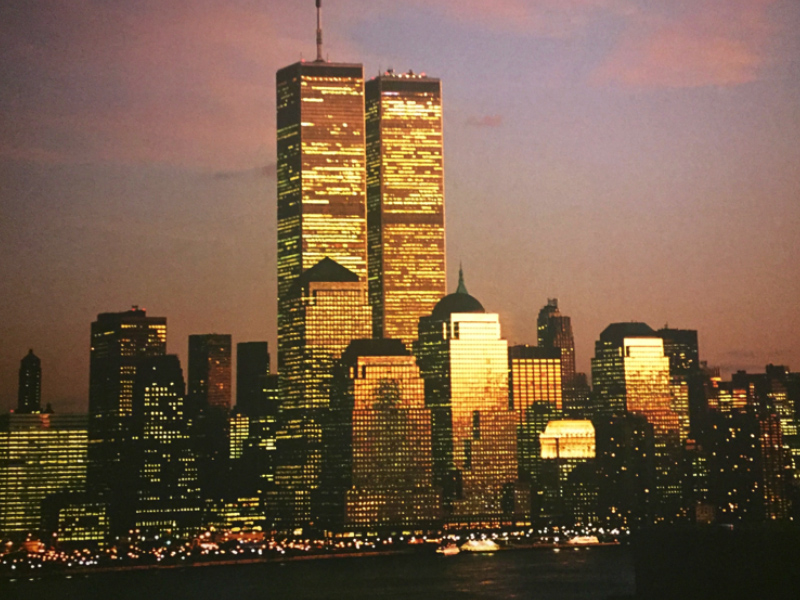 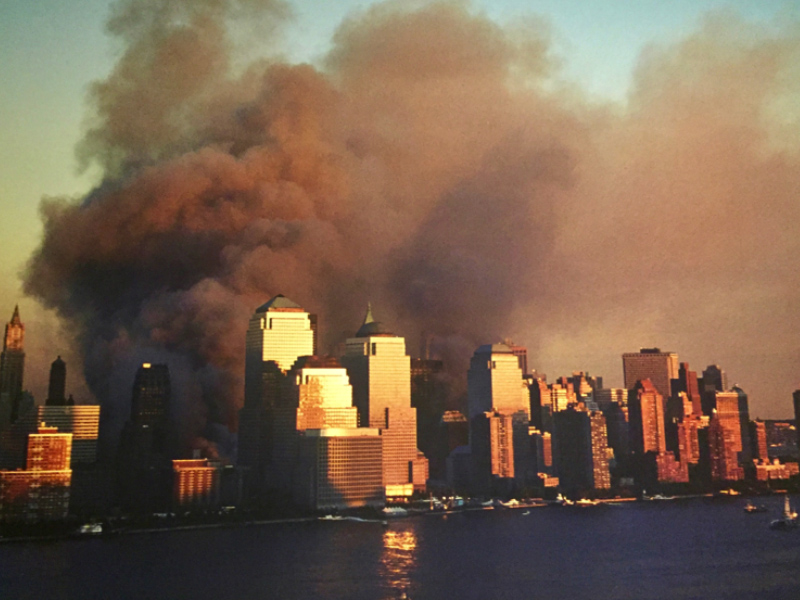 Including the coordinated aerial attack on the Pentagon and the aborted flight headed for Washington, DC that crashed in Pennsylvania, nearly 3,000 people were killed (not including scores of others who later died of related causes) and over 6,000 injured, with many billions of dollars in property damage.

Three memorials were erected to honor those who lost their lives, each dedicated on the anniversary of the tragedy – the Pentagon Memorial in Arlington County, Virginia in 2008, the National 9/11 Memorial in New York and Flight 93 National Memorial near Shanksville, Pennsylvania in 2011.

The WTC site has since been completely rebuilt, including One World Trade Center (nicknamed Freedom Tower, the tallest building in the Western Hemisphere), several other buildings, the 9/11 Museum (opened in 2014) and the striking memorial. 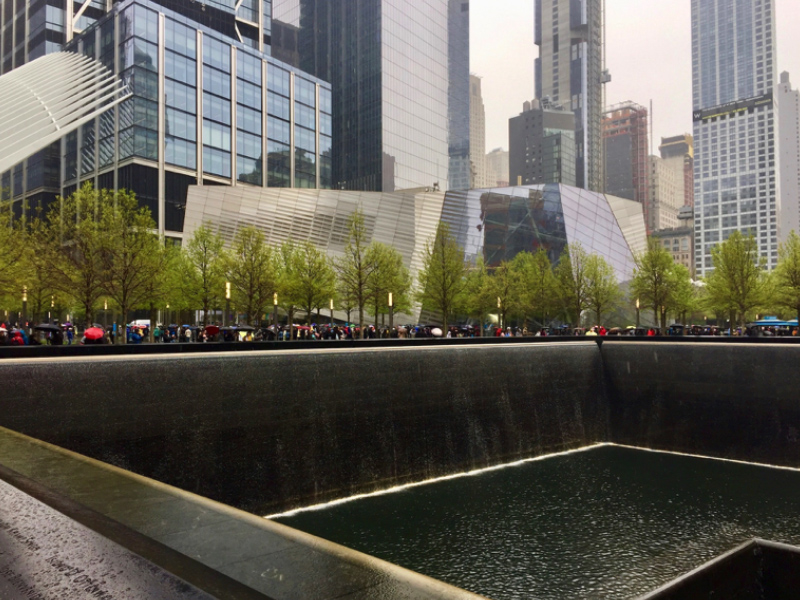 The design of the 9/11 Memorial was the subject of an international competition with over 5,000 entries. The design ultimately chosen was by Israeli architect Michael Arad of Handel Architects and landscape architect Peter Walker. It featured two 1-acre square reflecting pools with 30-foot black granite waterfalls marking the building footprints of the Twin Towers, surrounded by a grove of swamp white oak trees. The names of 2,983 victims are inscribed on metal parapets surrounding the reflection pools. The design is hauntingly beautiful with the water disappearing into a square hole in the center of each pool; it was called, appropriately, “Reflecting Absence.” 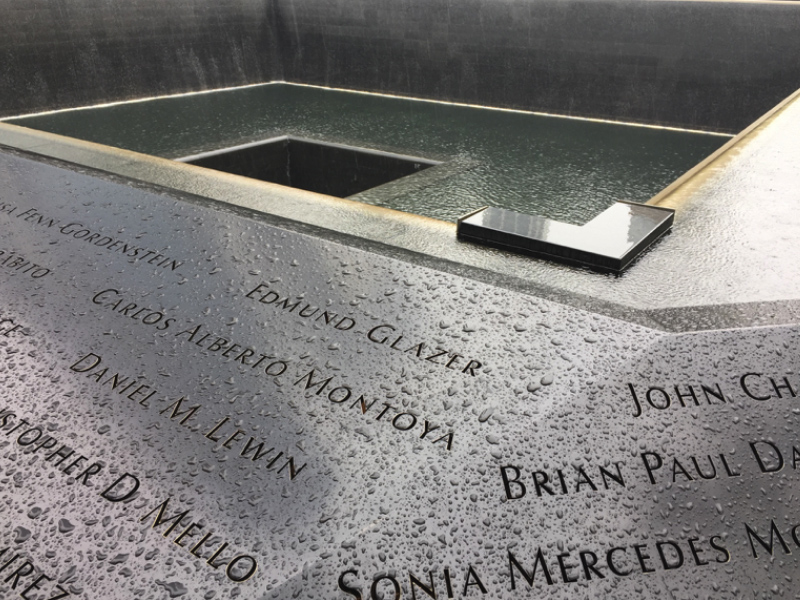 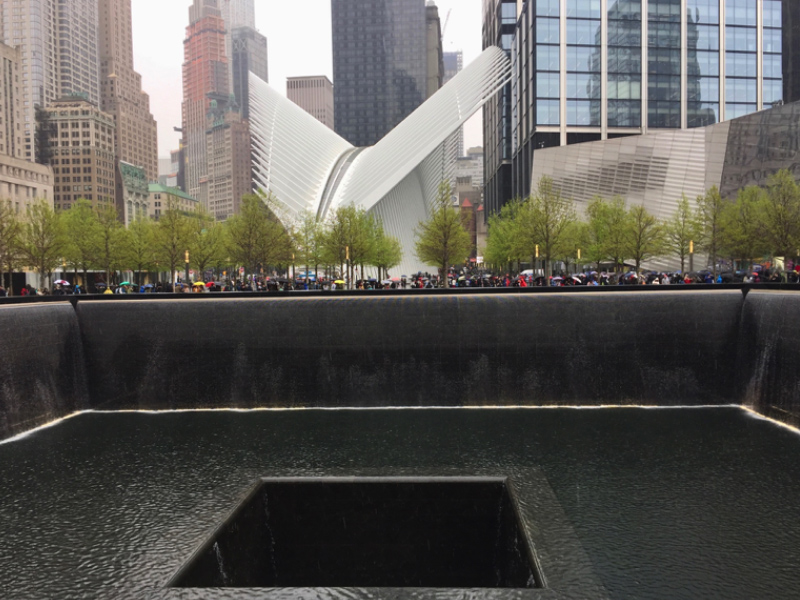 The museum is mostly underground beneath the memorial, featuring remnants of the original construction, artifacts, a movie featuring President Bush and other key figures, and a media installation with historical footage and personal reflections. Some photos below show various memorabilia, including part of a steel column, the communications antenna that originally stood atop the North Tower and the “Last Column,” which remained anchored in bedrock beneath the wreckage. This column was unearthed and removed from the site in 2002, subsequently decorated with thousands of markings and tributes by workers and family members. Also shown is a section of the original slurry wall along the west side of the site adjacent to the Hudson River; failure of this wall during the 2001 attacks could have flooded the New York City subway system. 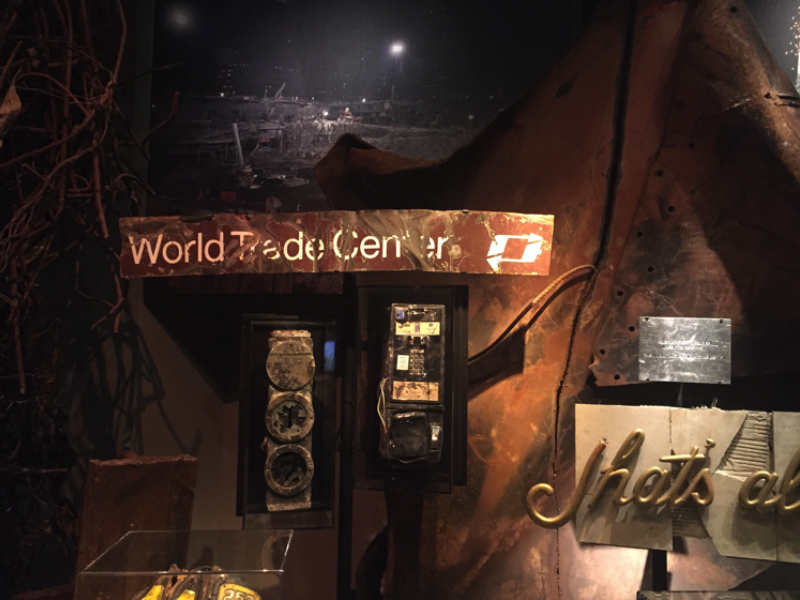 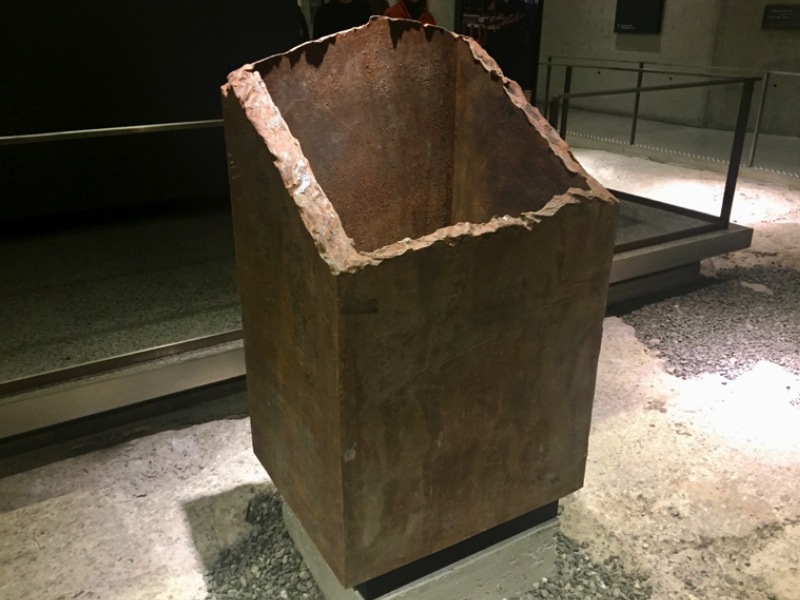 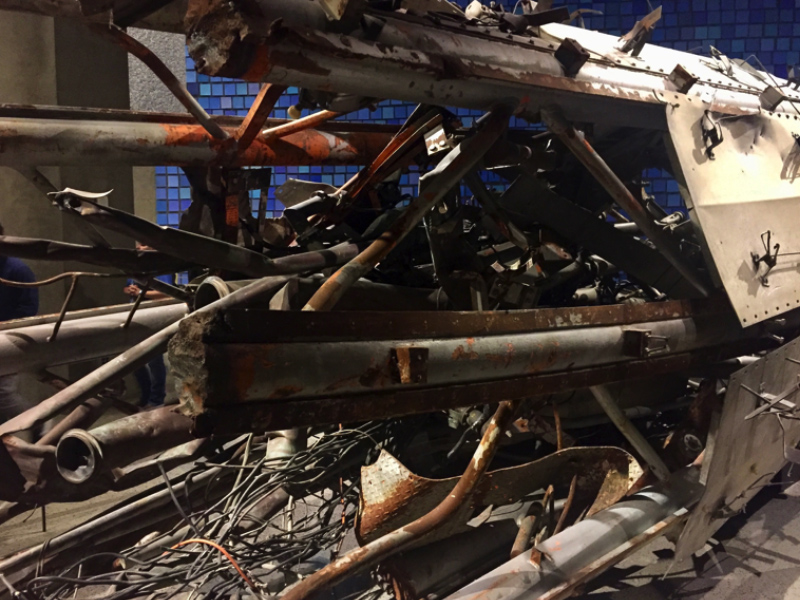 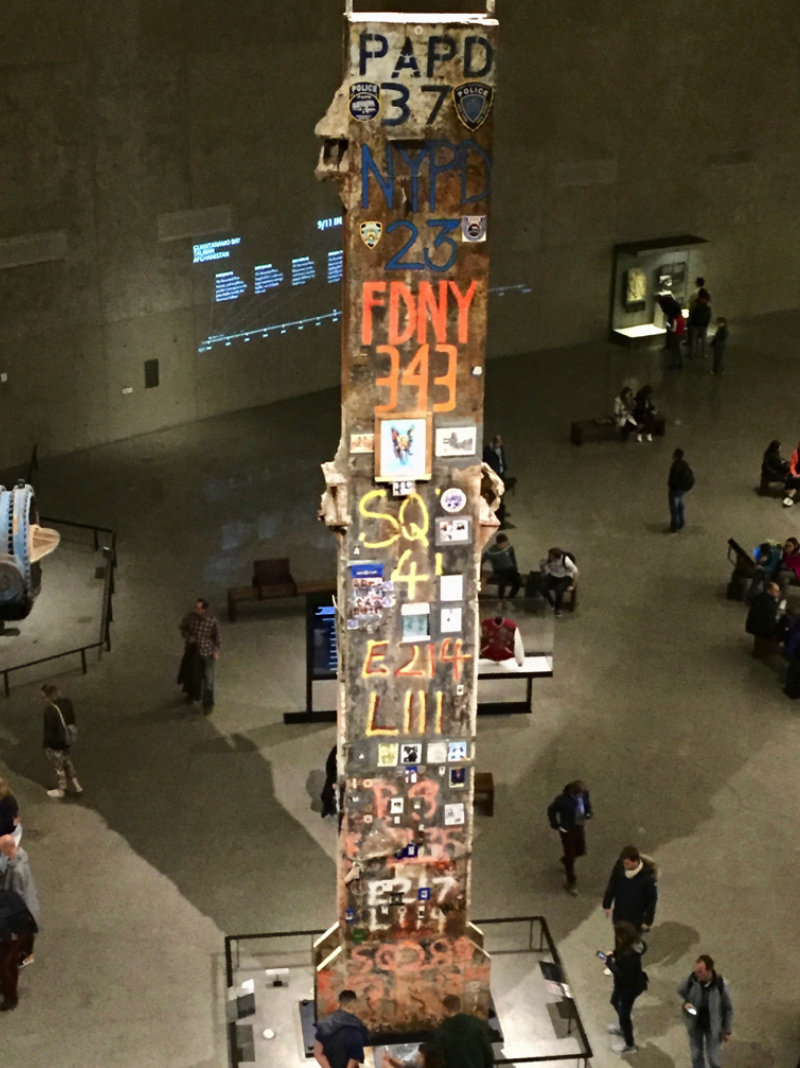 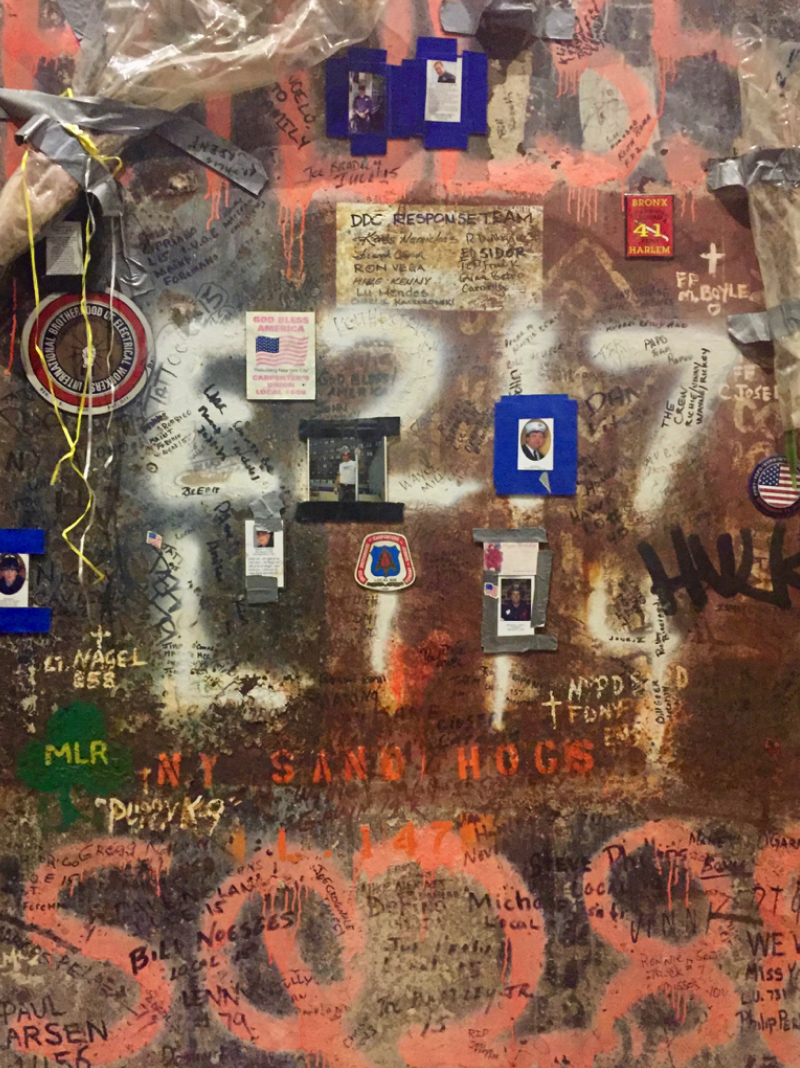 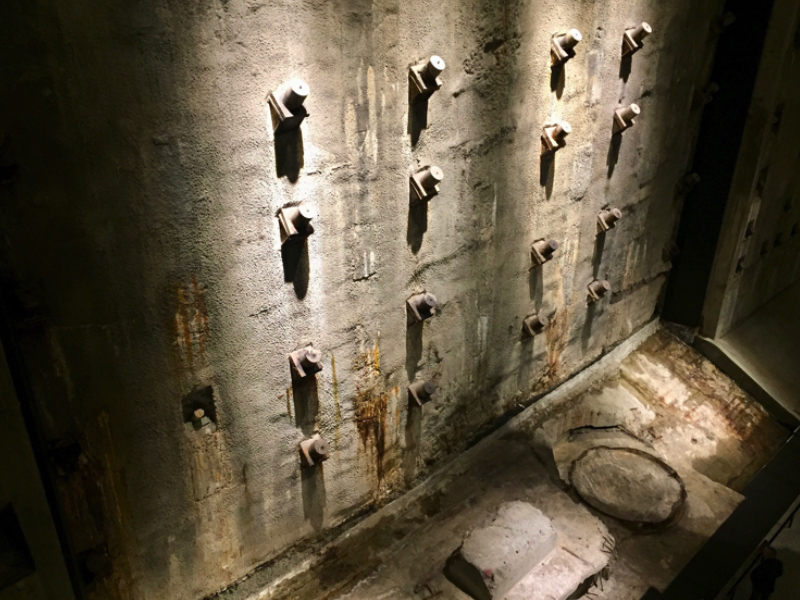 The 9/11 Memorial is a must-see for anyone traveling to New York. The monument is a beautiful tribute to those who lost their lives on 9/11, honoring their memory, but also our ability to move forward from tragedy as we inevitably have to do throughout our lives.